Home › Blog › Surfana Crewweek: Our Surf Adventure to the North of Spain

Surfana Crewweek: Our Surf Adventure to the North of Spain

After a busy season ensuring everybody else has a great vacation, it’s time for the Surfana crew to take one of their own. Once the shutters roll down in the surf school windows and padlocks are fastened to the container doors, Surfana embarks upon an annual holiday to the breathtaking region of Cantabria, Northern Spain. The Surfana crew week is one of the many perks that the Surfana crew enjoy throughout the year.

Events such as the Surfana Festival, the annual Surfana Softtop Sessions and the numerous live music sessions held at the Surfana Surf Camp are all reasons to become part of the Surfana family. The Surfana Crew Week is inundated with inspiring and informative clinics and workshops and is the perfect opportunity to share waves, enjoy nature and reminisce about another unforgettable season. By the end of the week, everyone walks away with salt in their hair, a smile on their face, and a few extra tricks up their sleeves.

Cantabria is an autonomous coastal region in Northern Spain, neighbouring Basque Country, Asturias, and Castile and León. The region is stunning, with vibrant green farmland that undulates between quaint fishing villages and gorgeous sandy beaches. Cantabria is also home to the formidable Picos de Europa, a snow-capped mountain range that lends a Lord-of-the-Ringsesque backdrop to an already impressive landscape. Playa de Oyambre is a secluded crescent-shaped bay located in Cantabria with a small campsite that overlooks the water. For years, it’s been the perfect place to host the Surfana crew week. 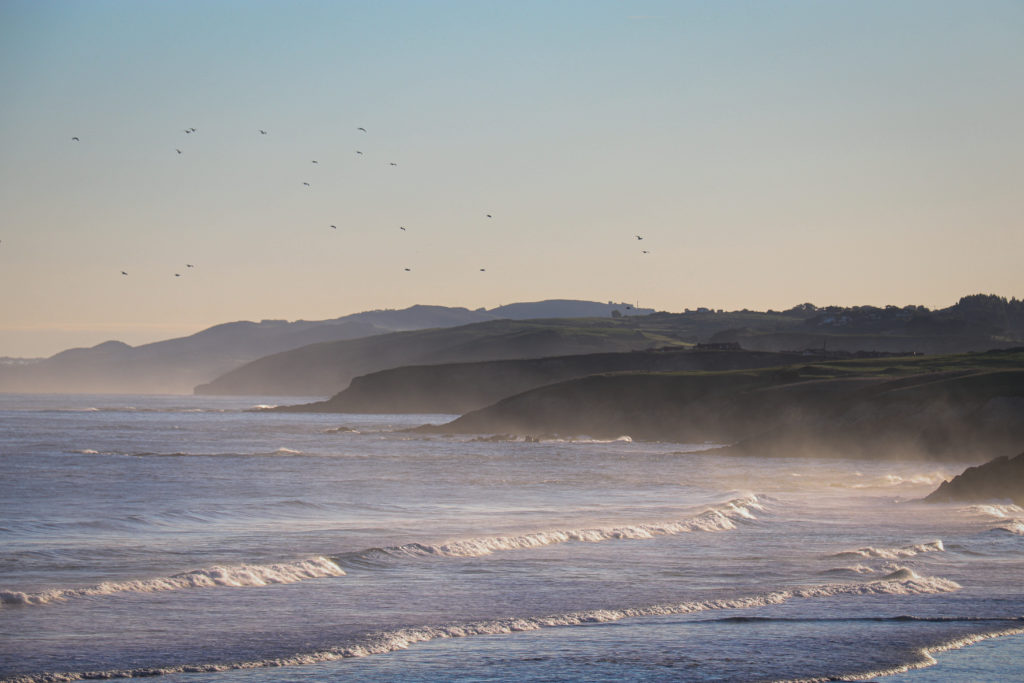 Yellow Bird and the illegal stowaway

Oyambre’s northeasterly orientation offers great protection from the persistent westerly winds and powerful October swells. The western corner, known as Pájaro Amarillo (Yellow Bird), is well protected from wind and swell and is a local favourite when the waves are fierce. The spot got its name after an American plane on its way to France was forced to make an emergency landing on the evening of June 14th, 1929. The plane ran out of fuel after a stowaway (a 25-year-old unemployed American) climbed into the plane—unbeknownst to the pilots—in the hopes of fulfilling his dream of crossing the Atlantic. Despite rigorous fuel calculations being made before take-off, the additional weight of the young American passenger was enough to cut the journey short. 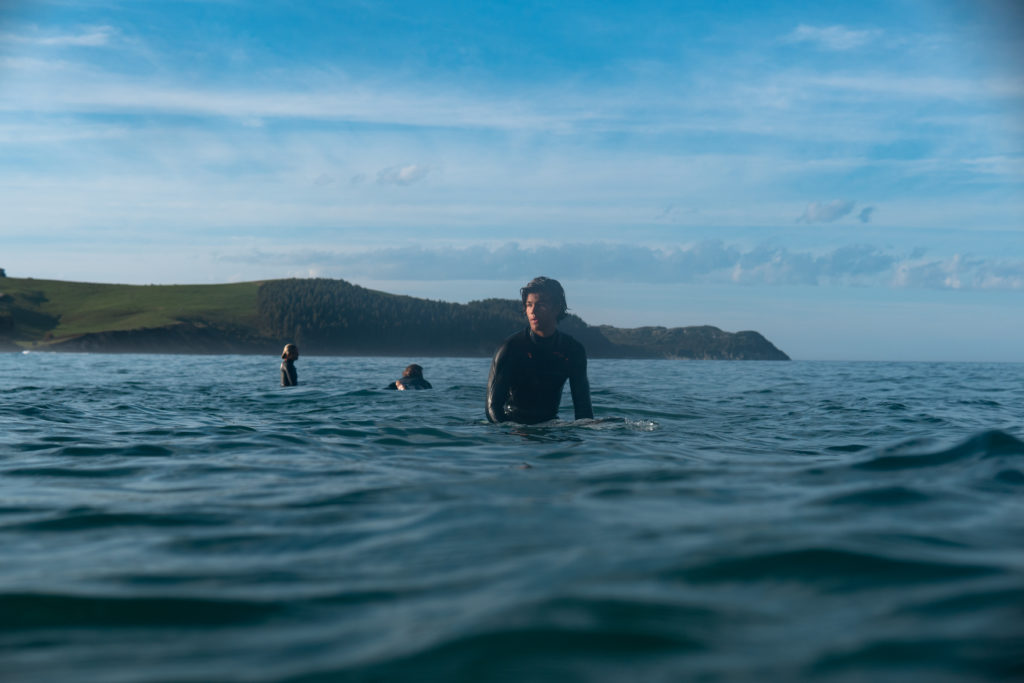 Just a 10-minute drive west of Oyambre lie the sibling beaches of Gerra and Playa de Merón, two beaches connected by a long stretch of golden sand. Both Gerra and Merón are north-facing, giving them maximum exposure to the northwesterly swells but little protection from northwesterly winds. When Oyambre takes time off, these high-quality beach breaks have frequently provided the Surfana crew with excellent surf sessions since the first crew week in 2010. Sunset surfs are particularly mesmerising here. As the sun drops behind the peninsula, it casts rays of golden light into the sky. 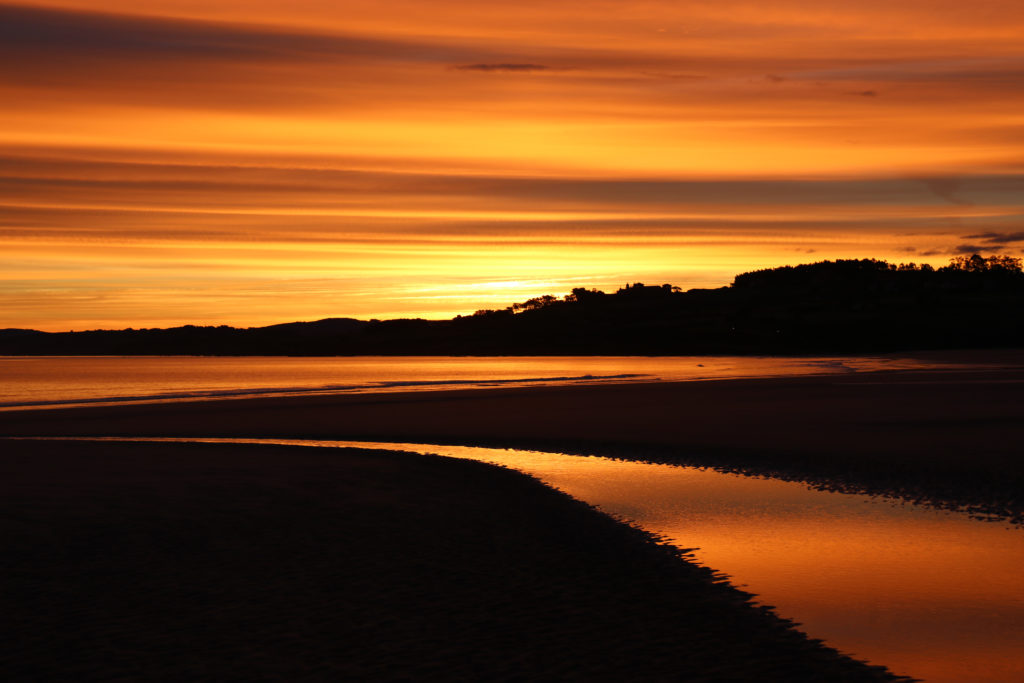 Almost seventy wave-starved Surfanis just disembarked the bus at Oyambre and a mixture of confusion and disappointment has already started to ripple through the crowd. Did we take a wrong turn? Did we board the right bus?  Were it not for the distant horizon and nearby beach bars, we’d be forgiven for thinking we’d arrived at a lake. The ocean’s flat. So flat, that several members of the crew have already renamed the spot ‘Lake Oyambre’. The keener surfers have already started loading boards onto roofs and venturing out in search of waves. More seasoned Surfani’s knew the obvious choice was Gerra on account of its greater exposure to northwesterly swell. With almost no wind it was also likely that the waves, if any, would be very clean. Luckily, there was now enough time to install the Surfana tribe on the camping terrain. 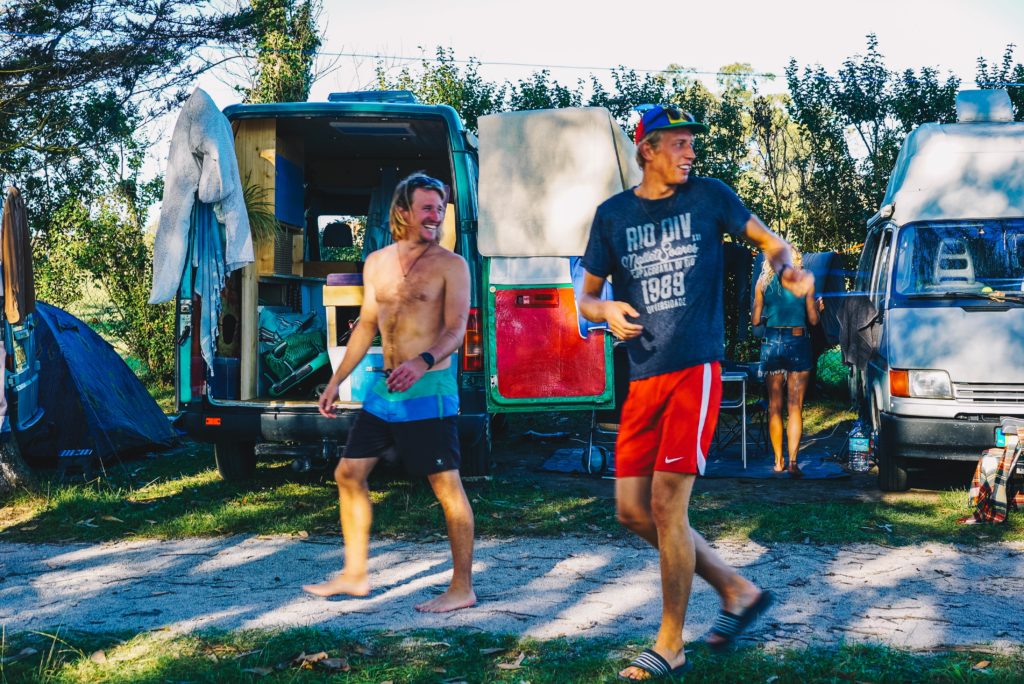 The leaves on the trees have hardly moved an inch since the sun rose behind the mountains this morning. The only thing disturbing the surface of the water is the steady ocean currents and the movements of the tides. Lake Oyambre seems to be upholding its new title. Another band of Surfani’s have gone out in search of waves today, while others decided to conserve their energy and relax on the beach or follow the surfskate clinic organized by our legend Dino, a potentially wise decision as the surf forecast has started to show promise!

The wind has remained low, but the water is showing signs of movement. Miniature lines have started marching into the bay at Oyambre and several Surfani soft tops have taken to the water like fleets of popsicles. While some have chosen to remain at base camp, others have uprooted and embarked on another expedition to Gerra and Playa de Merón in search of bigger waves. Luckily, we had tons of other fun things to do when we’re together. A little beach party here and there, cocktail workshop, bonfires, flow dance, spike ball, volleyball, board games… Especially Catan, since there is a fierce competition going on amongst (almost) all Surfani’s. We know how to enjoy ourselves!

Today, the beginner surf lesson is being held and conditions are perfect, the waves in Oyambre have improved overnight and only a light northern wind puffs into the bay. Now and again cars from Gerra return to camp carrying surfed-out Surfanis wearing ear-to-ear smiles. There was no need to ask how the waves were.

Conditions at Oyambre are similar to yesterday and word in the camp is that Gerra’s struggling to handle the increasing wind. There’s certainly still a wave to be had, but there’s a buzz of excitement as some of the crew look towards tomorrow. A large swell is forecasted—the biggest of the week—and some of the more confident surfers can’t wait to get a piece of the action. In the meanwhile, our team of photographers made sure that they captured the beauty of both our people as the place we inhibited for that week.

The sound of wax being impatiently applied to a surfboard can mean only one thing.

It’s low tide and the swell is solid. As the waves approach the shallow sandbar they heave into the air, doubling or even tripling the wave height. Some surfers have already made their way into the lineup, not without taking a few lips to the tops of their heads first. The morning progresses with surfers taking off on steep drops that break unpredictably left or right, only revealing their intentions at the last moment. One Surfani returned to camp with his board split into two pieces. He was smiling. As the day went on, the tide became higher and produced a quality peak at the western end of the beach known as Yellow Bird. By now, locals had finished work and were eager to get a piece of the action, but the frothing Surfana crew were still representing a significant portion of the lineup.

A day we’ve been waiting for: the Surfana Pro Oyambre surf competition! Today, we compete with each other in the water on a softtop that we brought all the way from the Netherland. The surf conditions for it are amazing, allowing all surf levels to join. ‘Softtoppen is leven’ is what Surfani’s used to say to each other. Everyone was in a good mood, ready to give all their energy during the heats. A day full of sun, party waves, cheerleading, heats, but also hard work and sweat. We all wanted to win, as Surfani’s can be fierce when it comes to playing games. Some did everything in their power to be the best of their heat. The skilled judges inspected every wave taken from the shore, armed with the binocular, notebook and megaphone. We saw interesting outfit choices, handstands on the boards, triple drop-ins, creative wipe-outs and of course skillful tricks. A sunny day to remember!

Mother nature served up user-friendly conditions for the last official day of crew week. The swell was small, starving Oyambre of anything rideable, but Gerra came to life throughout the day, with clean one-metre waves forming as the tide rose over the various sandbanks. 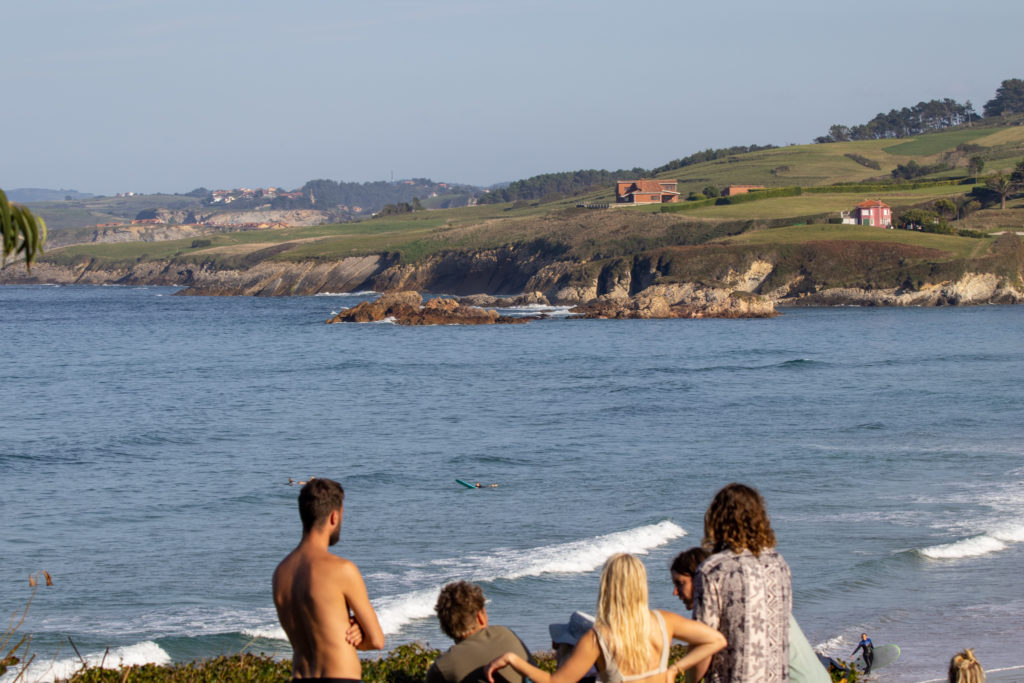 Chase the good life with the Surfana family

To spend a week with like-minded spirits is both empowering, sometimes challenging, fascinating but above all heart-warming. Any normal family wouldn’t stand a chance at a week-long holiday with over 90 people. But Surfana isn’t your regular family. It’s a united team of colorful individuals in pursuit of the ultimate thing: “the good life.” Thank you organizers of the week for all the effort that has been put into the total experience. Thank you photographers for capturing the vibes of this week. It was hard to pick the right images, as they were too many nice ones. You wanna be part of this amazing experience next year? To have your chance of joining the Surfana family on next year’s crew week, apply now to join the team next season.