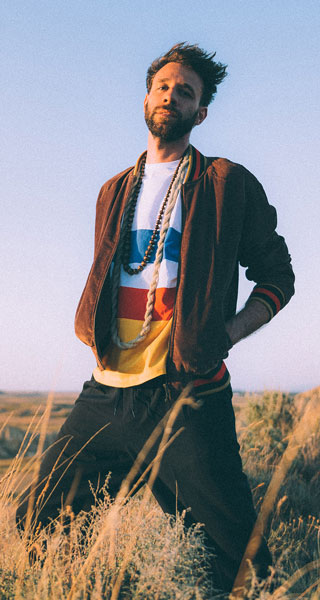 To melodize freedom sounds great, but not everyone can do it. Because studio skills alone are not enough. You have to have experienced them, done your thing. I am one of those. One who is on the road in the world. One who has been making music for a long time and has brought it to stages all over Europe. My songs are inspired by the vibes of the California Bay Area as well as by the time I lived in Africa. IMPALA RAY is the sound you want to hear when you let go.

In 2014, shortly after I decided that a office life is not the right thing for me, I started anew and founded IMPALA RAY. I played in parks, next to the Isar in Munich and during shitty weather in laundrettes – with fresh new sounds. If you want to get in touch with people, you can do just as well with tuba and dulcimer as with African drums and experimental beats. What counts are the songs and the journey we go on with them.

The trip starts with the first album „Old Mill Valley“, which reduces my own roots to the roots of folk and blues. Two years later the first hit „The Gambler“ leads directly to „From the Valley to the Sea“. The second record experiments with more punch and relaxed delay to give a short break with the summer track „Stay“. A lot has happened between home and West Coast: IMPALA RAY’s music has thrilled stages and blogs and made up lots of ground internationally.

SPLASH MATHARE
After so much turbulence it’s good to remember. That’s why we’re going back to Kenya in 2018. After school I spent some months in Nairobi and worked at the German school. For hours I wandered through the alleys, learned Swahili and fell in love with the continent. For SPLASH MATHARE, the first song from the new album planned for 2019, I returned to the »Mathare« slum and developed IMPALA RAY’s sound at the same time. With this song I take the listeners with me to Africa. You can hear jungle sounds, jingling bottles and people I recorded myself. The song is about the freedom to do what you want. Whether you simply want to jump into the sea or cycle from Paris to Tibet – people all over the world have the same dreams.

ENCORE
For ENCORE, the second song from the new album planned for 2019, I am thinking about friendship and relationships. I want to express that it is always worth fighting for a person you love. Even when you’re going through a hard time together, you might have to add something to it sometimes in order to be able to restart together. That’s where the title ENCORE comes from. Throw off ballast, focus on the essentials and then we’ll tackle this again together. And if you pull it off, you end up having an even bigger party together. That’s why I ended up giving the song that big, crazy freak part. The impressive pictures of the music video have all been taken in Morocco.