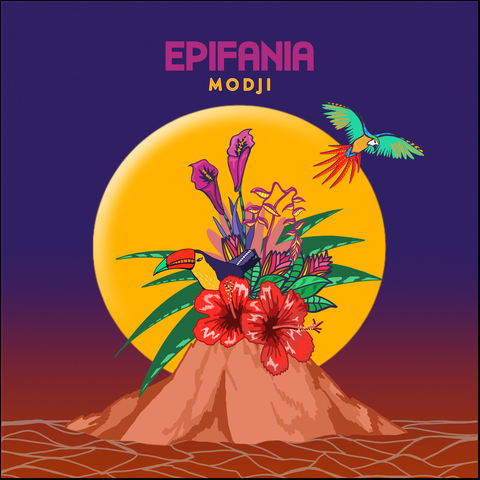 The worldly Modji kicks off the summer early on Friday 10 May with the presentation of their debut album Epifania in the Rotterdam Grounds. On the first album you can immediately hear that the name Modji – which means “the journey” in Ewe, a dialect that is mainly spoken in the countries of Ghana and Togo – is not half-hearted. The wanderlust spatters from when the formation flows from West African traditions to modern afrofunk and from the sultry Latin American to their western roots. The energy of the Rotterdam band can be felt both on the album and on stage; an electric shock that gets every body part moving.

“Modji originated from all the music streams that I discovered over the years,” says band leader Yannick van ter Beek. “First the West African, then the Afro-Cuban and later the Brazilian rhythms. All great, so I had to create something with that. ”Van ter Beek flew halfway through his career to be inspired by the grand masters and knew that this band had to make the same journey in terms of sound. “I soon met Ramon Mendeville, who is at the same time one hundred percent Chilean and completely Amsterdam, the perfect musical leader for this project,” says Van ter Beek.

The two found a shared musical wanderlust, the urge to discover, and put together a band that connected. The company was expanded with the Flemish Tuur Moens (drums), the Cape Verdean Paulo Bouwman (guitar), the Cuban Humberto Rios (latin piano), the Greek Yiannis Marinos (trombone) and the Dutch Jeroen van der Ley (bass) and Ellister van der Molen (trumpet). “These musicians take us on an adventure to their roots,” says Mendeville. “Humberto, our Cuban genius, brings Modji to Latin America, Paulo drives us through Africa and the grooves of Jeroen and Tuur glue everything together with western precision. Add two world-class blazers and your travel schedule is complete. “

That Modji is ready for the album release is evident from reactions to the performances they have already played: “With exciting songs such as De Noche y de Madrugada and Tu Cachupa we already have public favorites,” says Van ter Beek. The live performances are characterized, in addition to all the continents that pass through your eardrums, by the chemistry that prevails and a shared desire. These are musicians who give themselves up for every note and every rhythm; everything to get the audience dancing. With Epifania it works every time.

“Modji sounds like life should be every day; always summer and full of passion and desire. Food lovers can discover this on 10 May at Podium Grounds in Rotterdam, “says Mendeville. “We are going around the world in one evening. People who say that “multiculti” does not work may come to experience Epifania. “